What are our customers saying about CankerYanker®?

Worth trying if you suffer from canker sores

This product is a life saver !! For years after eating any kind of nuts my mouth would break out with horrible canker sores canker yanker has allowed me to eat nuts again.

I hardly ever write reviews but have to as I’ve had canker sores since I was a child. I gave up playing clarinet as a kid because my canker sores interfered with being able to play, I dreaded my period because every month I would get canker sores, stress, I’d get canker sores. The only time I never had them was when I was pregnant, so I’m guessing it has to do with hormone/cycle, etc. but lately I’ve been getting them really bad. A few years ago I had over 70 canker sores, yes over 70! I cried in my dr. office as I was losing weight cuz I couldn’t eat or drink anything, could barely function or talk at work, and she had no clue what to do. She referred me to ENT dr. they looked at my mouth in wonder, took pictures, brought in other drs. and said “wow, we’ve never seen anything like this before”. Eventually, they gave my prednisone/steroid and canker sores went away within 48 hours, but that is temporary solution and I don’t want to be taking steroids every time I get canker sores!

So recently I had another outbreak which seemed to be after eating spicy food and tomatoes/peppers, and did research on amazon to see what I could do to help alleviate my canker sores. I had 4 canker sores when I got this in the mail. I drank one cup of water with 1 packet and it tasted better than I expected actually. Kind of like the Emergen-C powder drinks. Mine didn’t really effervesce very much but I stirred it quite a bit and it seemed to dissolve pretty well. So I went to bed not thinking much of it.

Well, I woke up today, ate breakfast, was going about my day and then realized holy cow, I ate breakfast and my canker sores didn’t hurt! So I looked in the mirror and wow, my 4 canker sores were barely there! I could touch them and they didn’t hurt, and they were getting that reddish edge around them when they heal and were much much smaller than the day before! I couldn’t believe it!

First thing I did was text my Dad who also has had canker sores his whole life (not as bad as mine but still several canker sores every few months when he is stressed), so he can try it. I definitely recommend it to anyone who has major canker sore problems like me! I will be telling my dr. and dentist all about this stuff!

It’s too bad it’s so expensive, but honestly, it’s cheaper than having to make a dr. appt. and pay for medication or orajel type pain relievers that don’t help in making them go away. I thought about drinking another cup today since I’ve only had one yesterday, but because of the cost, I am going to “ration” them out. Hopefully just the one cup from yesterday will be enough to get rid of these 4 canker sores completely, which I think it will based on how they look today after only 12 hours from drinking it!

Thank you to whoever created this stuff! Really, amazing life changing for me!

And no, I did NOT get paid for this and I did NOT get a free sample like some of the other reviewers on here. I am a lifetime canker sore sufferer who can’t believe something actually works to get rid of canker sores earlier and wish I found this stuff sooner!

My daughter had a bad canker sore

This stuff works. My daughter had a bad canker sore, and she drank 2 of these in one day and the next day it was gone.

I’m so happy to have found this product. I’ve been suffering from canker sores for years, but especially this year. CankerYanker promotes fast healing. I’m sold and just bought three more boxes!

I have used it twice and it works fine so far. Usually the sore will go away after a day. It also tastes great.

Canker sore prevented me from sleeping for days, next day absolutely no pain. Tastes amazing

I had an incredibly bad canker sore that prevented me from sleeping. After taking two of these in one day, it started feeling better and the next day there was absolutely no pain even though I could still feel the bump inside my mouth. It has 8333% the daily value for B12 which is proven to really help canker sores, and it also contains zinc (some might say that canker sores are caused by a zinc deficiency) and a bunch of other vitamins. I would recommend drinking this cold, it actually tastes really really good and I’m afraid I enjoy it a little too much. It’s a subtle sweetness, and doesn’t taste medicine-y at all. I did not receive this at a discounted price, I paid for one day shipping. I was just looking up a remedy on Amazon for my sore. I didn’t like the idea of other products coating my mouth and me tasting it, or the burning sensation that would occur with other products so this was perfect! Be sure to take it twice though, it’s more effective that way. 🙂

Wow this really works!! Dulls the pain and …

Wow this really works!! Dulls the pain and after a few usages the canker sore was gone! Well worth trying

This stuff really works! My husband has suffered from canker sores for years and none of the other products were able to help him.. We finally gave up and figured that it is just something we had to deal with. Then we found Canker Yanker and never looked back.. Price is more then fair for the results we get. We are on the third box and will be buying another one soon!

Pain was Gone with First Use

I have been suffering from canker sores for so many years. I remember in elementary school asking my teachers how to get rid of those pimples in my mouth that really hurt. One of my teachers told me she used Kanka so I tried it but hated how it numbed the canker sores and thats it. Whenever I have very little sleep I break out in a canker sore festival. My mouth kills and whenever I eat, I have to chew really slowly or eat only mushy foods. But even that is painful. Finally someone told me about canker yanker. I was skeptical to try it out because these drink things are usually not my speed. I was afraid it would taste so bad and make me nauseas. I pushed myself and took canker yanker and I am so happy I did. Not only did it help my canker sores right away so I could eat but it didn’t make me nauseas–it actually helped my stomach (must be from the pro-biotics) The Canker Yanker didn’t get rid of my canker sores right away but they didn’t hurt from the first and only treatment that I took. Within 3 days all my canker sores were gone, which is much quicker than my experience before I found this product. I have used the canker yanker with 4 different breakouts and I have been having the same success. Thank you for finally making something that helps!!!! I happily recommend this to anyone who suffers from canker sores. It really works

Absolutely the best and magic canker sore medicine I’ve ever had!

I Can Eat Pineapple Again!!!!!

I love eating fresh pineapple, but it causes terrible canker sores on my tongue after just a few bites. I saw this product and thought I’d give it a try. I did as the instructions stated and took it at the onset of a sore. I ate a bunch of pineapple and when my tongue started to feel that tingly burning feeling of a sore I mixed it up and let it fiz and then drank it down. I was worried that it was going to leave an awful after taste in my mouth, but much to my surprise there was no bad after taste left in my mouth and it actually tastes pretty good. I could feel the little sore on the tip of my tongue and noticed throughout the day that it didn’t hurt as much as it normally would, it was noticeable, but not painful. I mixed up the next glass full (I preferred using 10oz. of water, versus the 6-8oz. recommended, it just made the flavor more mild for me) and took it after dinner. When I woke up in the morning the sore was completely gone. I couldn’t believe it, I kept feeling my tongue where the sore had been and nothing! I was super impressed by that. I’m so happy that I found a product that allows me to eat pineapple again without being in pain for days. 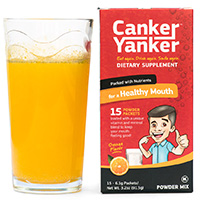 † Legal Disclaimer:
These statements have not been evaluated by the Food & Drug Administration. This product is not intended to diagnose, treat, cure or prevent any disease.